You are located: Homepage

Welcome to the Studio of Christine Bender 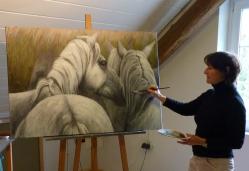 Christine Bender was born in Bitterfeld,Sachsen-Anhalt, in the former German Democratic Republic. Able to flee to the West as very young girl, she has lived in Hessen since the mid 70s and worked from her Atelier in her home in Villingen near Giessen since 1985.

Under the guidance of Michael Siegel, master-class student and Tutor at the Staedel Academy in Frankfurt/Main, Germany, Christine has studied painting and fine art for many years.

Horses have been Christine’s close companions since childhood. For the past three decades, she and her Family have bred Horses on the Family’s pastures at her adopted home in Villingen, at the foot of the rolling Vogelsberg hills.

Nearly every day, Christine can be found observing her subjects at pasture and in the herd – resulting in a multitude of sketches, studies and, ultimately, paintings vibrant in movement, character and astoundingly soft acrylic colour.

The charisma and sensitivity of these majestic creatures has fascinated Christine throughout her lifetime, and made them her prime subject on canvas. Spurning a unique and constant dialog, her very special affinity to horses bears an emotional intensity which she successfully relays to in ever new and exciting brush strokes in vibrant acrylic colour.

Horses are the creatures that painter Christine Bender can empathise with best. In her work, she opens the window for her viewers onto a delicate symbiosis between mankind and these magnificent beings.

Since 1985, Christine Bender has lived on her farm in the country village of Villingen, where she and her family live their passion: breeding and raising horses.. It is with a lingering, childlike wistfulness that Christine Bender recalls her childhood home in Bitterfeld in former East Germany, drawing from the fountain of her life’s experiences, bringing the cornucopia of impressions and joy to eloquent expression on her vivid canvases.

Bender’s continuous refinement of her exceptional skill would be a touch less brilliant without the guidance and astute training of a master: Michael Siegel, master student and tutor at the Städel Academy of Fine Arts in Frankfurt/Main, Germany. Her mentor throughout her painting career, Siegel has “watched over” all phases of Bender’s work, developing the perfection of her compelling painting technique: today, a well-tempered combination of realism and expressionism, indulging in the entire palette available with large-format acrylic painting.

Fitting the encroaching winter at year’s end, the artist has devoted her study to the cycle of life and the seasons in her horses’ own surroundings: instinctively, they seek shelter from winter’s icy wind and cold within the folds of the herd. Their massive frames provide the corpus from which all senses radiate – nostrils, ears and eyes –intensely concentrating on and interpret their surroundings.

The viewer’s attention is drawn by the warmth of a resting old mare, her heat radiating like a comforting down duvet… bottomless eyes inviting to intimate dialogue: is the glow of light from an innermost place? Is the amber glow so radiant, because a secret “Baltic gold” is illuminated within that light?

Drawn by initial fascination to these warm eyes, the viewer retreats, beholding the entire canvas... and traces back. This magnificent being Horse is realised in slow motion, frame-by-frame: vital, rushing waters, the day’s strenuousness run, and, ultimately, discovery of the sky’s blue radiance. Does that attentive ear already perceive what’s next?

Just as the film the „Horse Whisperer“ has enchanted so many, the paintings of Christine Bender inspire to more... bringing the magnificent breed horse a sensual step closer to their human admirers.